I am paraphrasing Prashant: when you get too caught up in the technique of the pose, you can miss what the pose has to tell you.

Prashant is the son of BKS Iyengar. He and his sister, Geeta, were brought into the duty of teaching Iyengar Yoga. The third generation is being groomed – namely through granddaughter Abhijata.

Prashant is the theorist. Geeta the technician. And Abby is finding her way.

Geeta gets you into poses more deeply than you knew you could. Prashant wants you to find where the pose takes you, not where you take the pose. At least that’s my interpretation of the teaching this time.

That being said- it’s still not the free form-do what feels good-rainbow and puppies yoga that can give the illusion of changing the world. This is traditional yoga that expects you to change yourself.  Or at least to take responsibility for your self and your actions. Blaming the ‘universe’, or the situation is not an option here. “Is it not your duty to find out…” Geeta

I’m finding out a lot of things here…

That empathy, compassion and sympathy are different and although the situation may be the same, where I’m at in the moment determines my response.

That every time I come here there’s a different button that gets pushed. Which is not a big deal in itself. Even buttonless people get pushed in India. It’s the place for it and why it’s so powerful spiritually. It’s certainly not because it’s clean, quiet and organized the way we think things should be when we’re doing deep inner work.

That when a button gets pushed, I become righteous. It’s one of the things I’ve been working on releasing. In the sense that self-righteousness makes me right and the other person/ situation wrong. Period. Full stop.

Righteous is like getting caught up in the technique of the pose. It doesn’t allow me to learn anything. I can miss the point, the magic, or as Cynthia would say, the essence of what that particular situation has to teach me.

And although I’ve come here for the third time to fulfill a requirement for teaching Iyengar Yoga – to learn more about it, the one thing that’s the same on this trip to India is that I’m learning more about myself than any of the poses.

I can learn how to do a better pose, but if in that I learn nothing about myself, I’ve missed something. That if I get too caught up in the technique of my life, I can miss the magic in the moment. 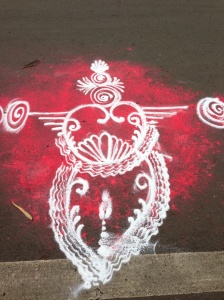 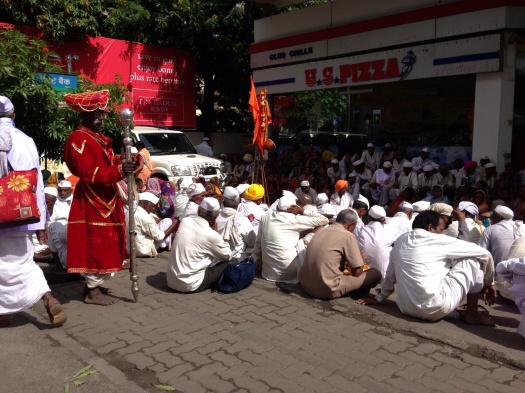 I’m still not sure about the Pilgrimage, but it happens every year at this time. 1000’s of people walk 100’s of miles to converge in Pune. It affects the whole city because they block of roads for the parade.
We were on the other side of the river trying to get home from a grocery shop and our rickshaw driver tried his best but he finally pulled over, and made us get out with all of our bags.
We didn’t have a clue where we were and he spoke no English.
So the good deed shout out goes to the lovely young professional woman that was walking back to work and was kind enough to escort us to a familiar place so that we could walk the rest of the way home.
The rickshaw driver tried, she graciously offered guidance.
Choices. We could have gotten pissed off at Crazy India…the bags were heavy, it was stinking hot, and we were ‘lost’. Instead we embraced the adventure, got some cardio and were witness to the crowd of pilgrims that also had to rely on the kindness of others on their walk to get to Pune.